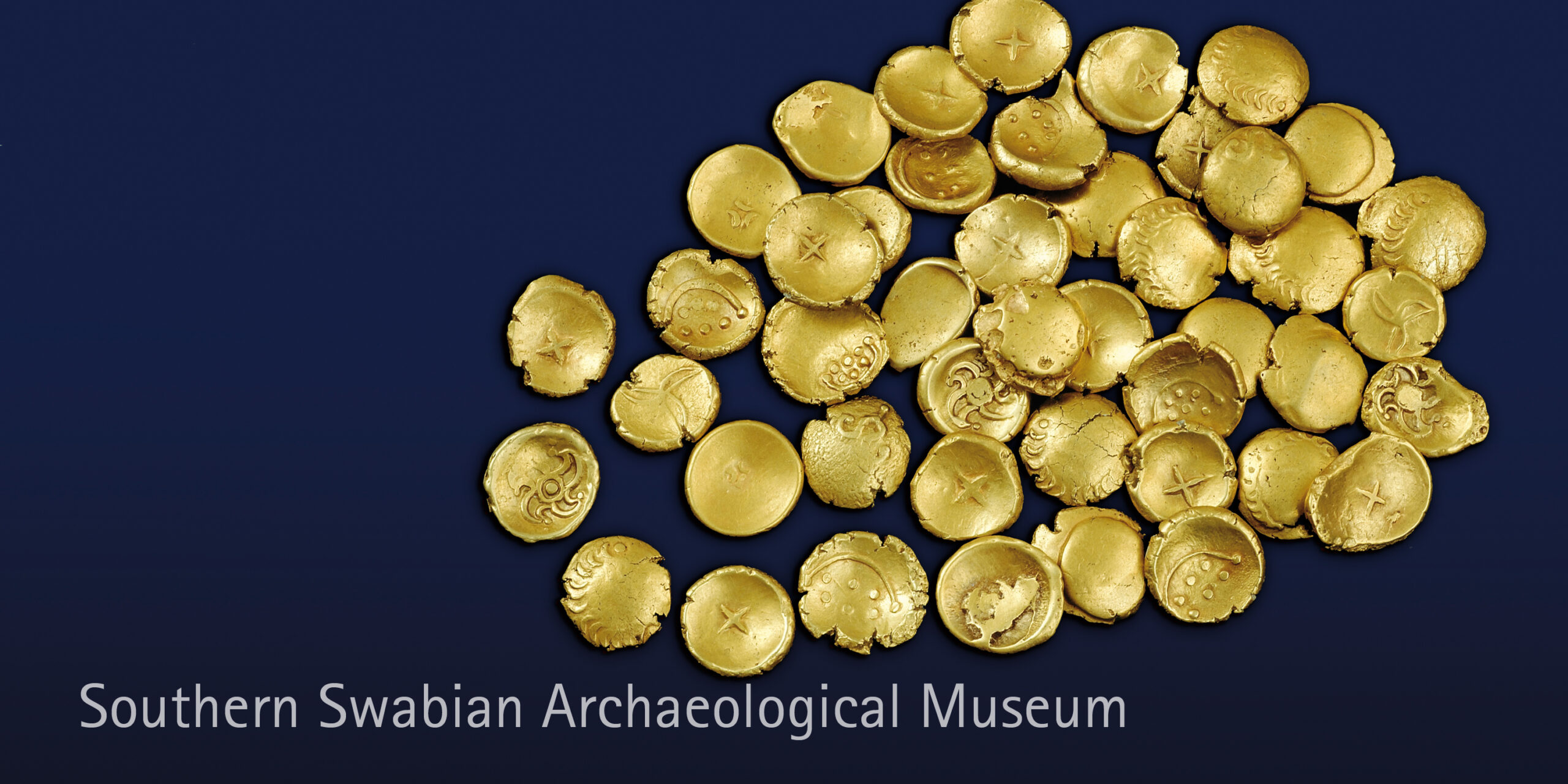 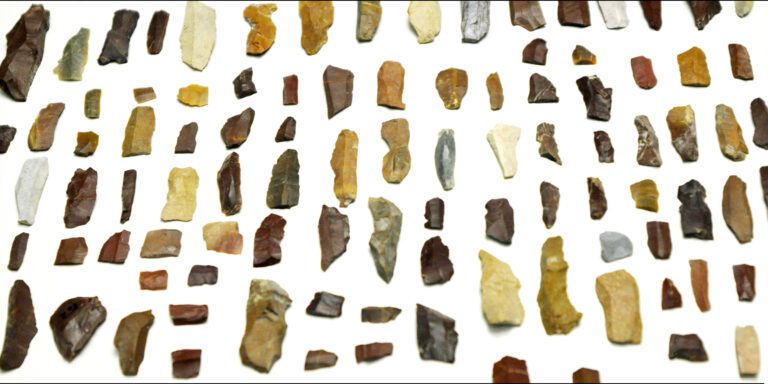 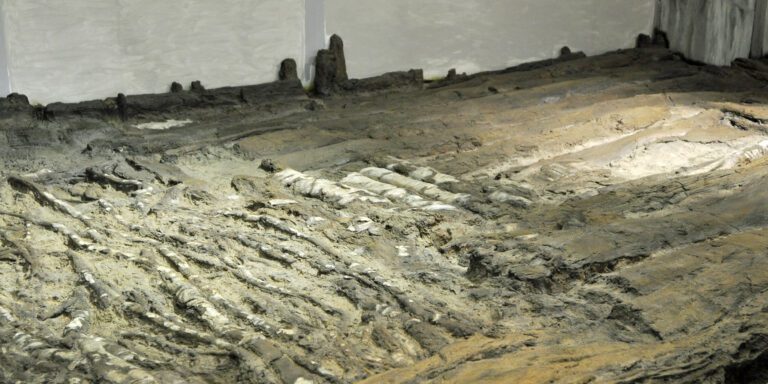 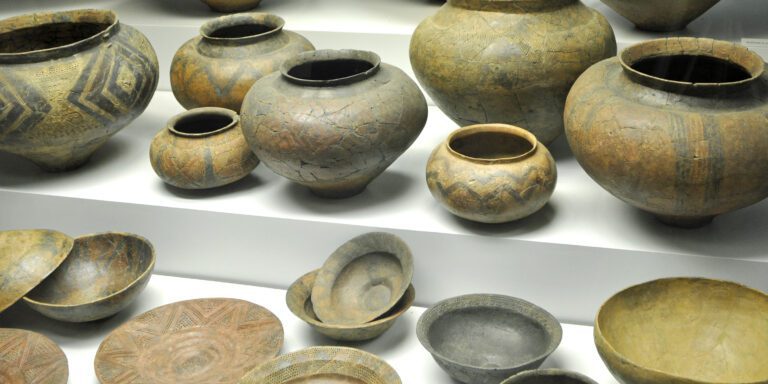 CELTS IN THE LATE BRONZE AGE

CELTS IN THE LATE IRON AGE 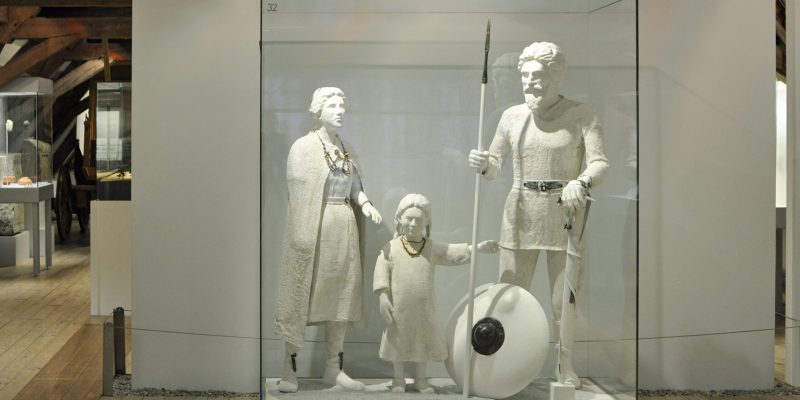 In 1994, the Southern Swabian Archaeological Museum was opened In Mindelheim as part of the Archäologische Staatssammlung, a museum in Munich. Our branch museum presents the rich archaeological finds of Southern Swabia. Tools of the Middle Stone Age (Mesolithic), representing the first evidence of the presence of humans in what is now Southern Swabia, are followed by further thematic blocks, which vividly convey the local settlement and cultural history from the Stone Age to the early Middle Ages. 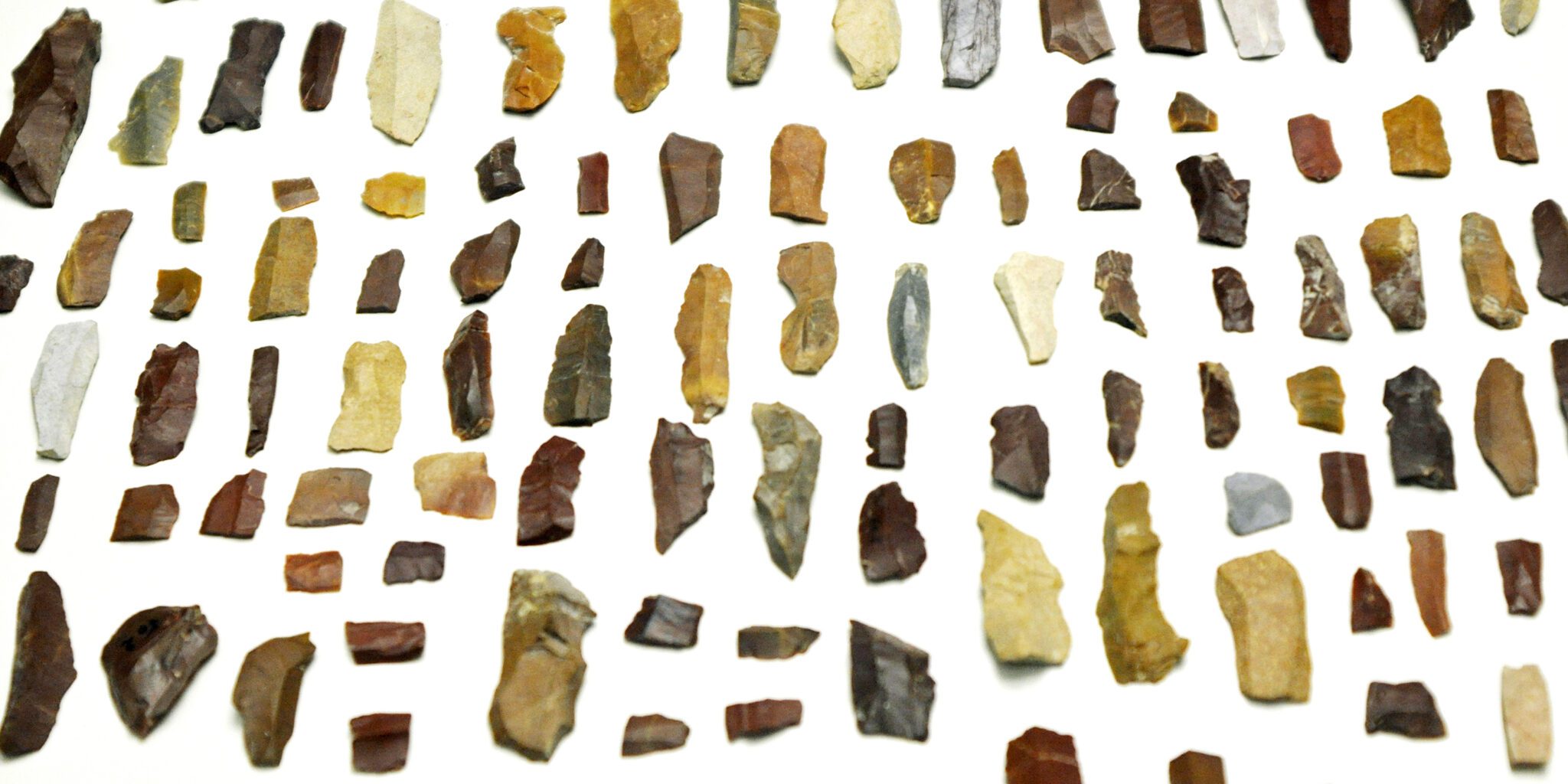 Hunters near Lake Forggensee in the Mesolithic period
(7000-6000 BC)

Lake Forggensee is the result of a modern damming of the River Lech near the town of Füssen. 9,000 years ago, the water from melting glaciers collected at the same spot to form “Lake Füssen”, which later silted up. At that time, nomadic wild hunters camped on its northern shores. The local historian Sigulf Guggenmos (1941-2018) discovered finds from the Mesolithic period in at least eleven places. With more than 12,000 individual pieces of flint, this is one of the largest collections from all of Central Europe.
The shapes of the implements are enormously varied. At least some of them were fixed in handles made of wood, bone or antler. Small, triangular or square “microliths” served as arrow tips or harpoons. Some tool forms and materials may even have come from Northern Italy. 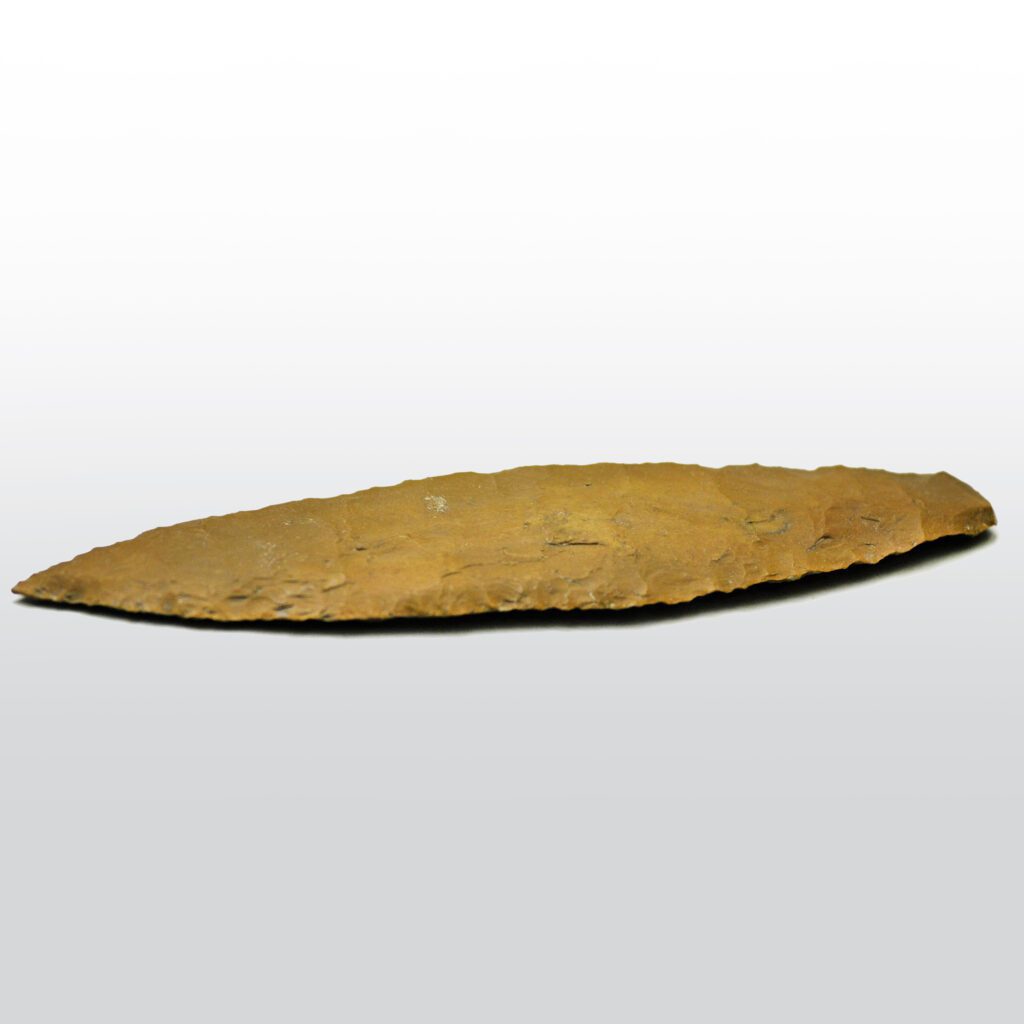 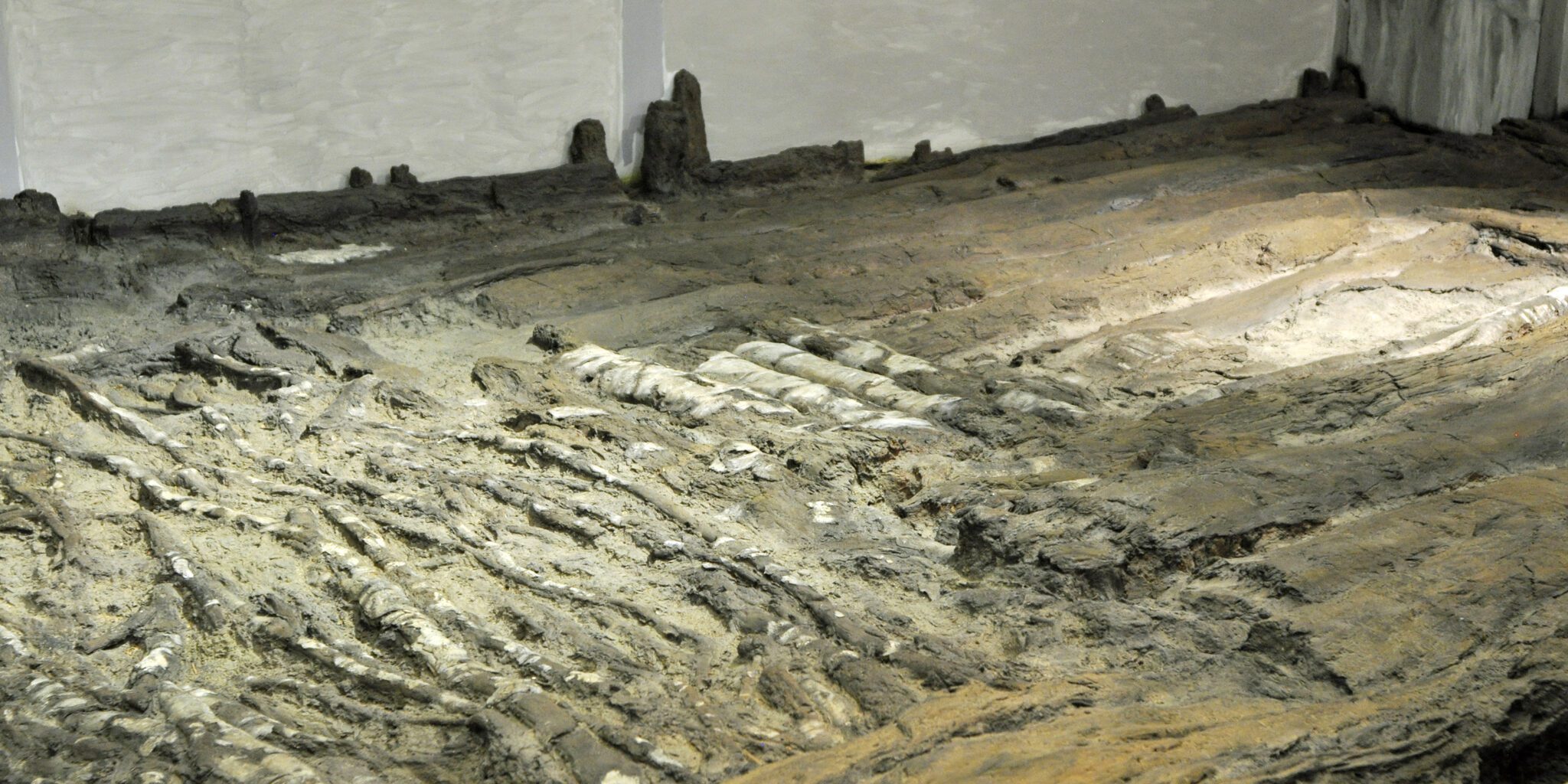 By using scientific methods it was possible to determine exactly when people first settled here for farming and animal breeding. They belonged to what is now known as the “Altheim culture”, a regional group of the younger Neolithic period. Their settlement, which was situated in a swamp, was destroyed and rebuilt several times. The people lived with their animals under one roof in a maximum of 19 small dwellings. The separate living area always contained a small clay-domed oven. Many of the timbers and other organic materials from the buildings were preserved due to the rising groundwater level. The remains discovered here are unique and so special that they are now a UNESCO World Heritage Site. 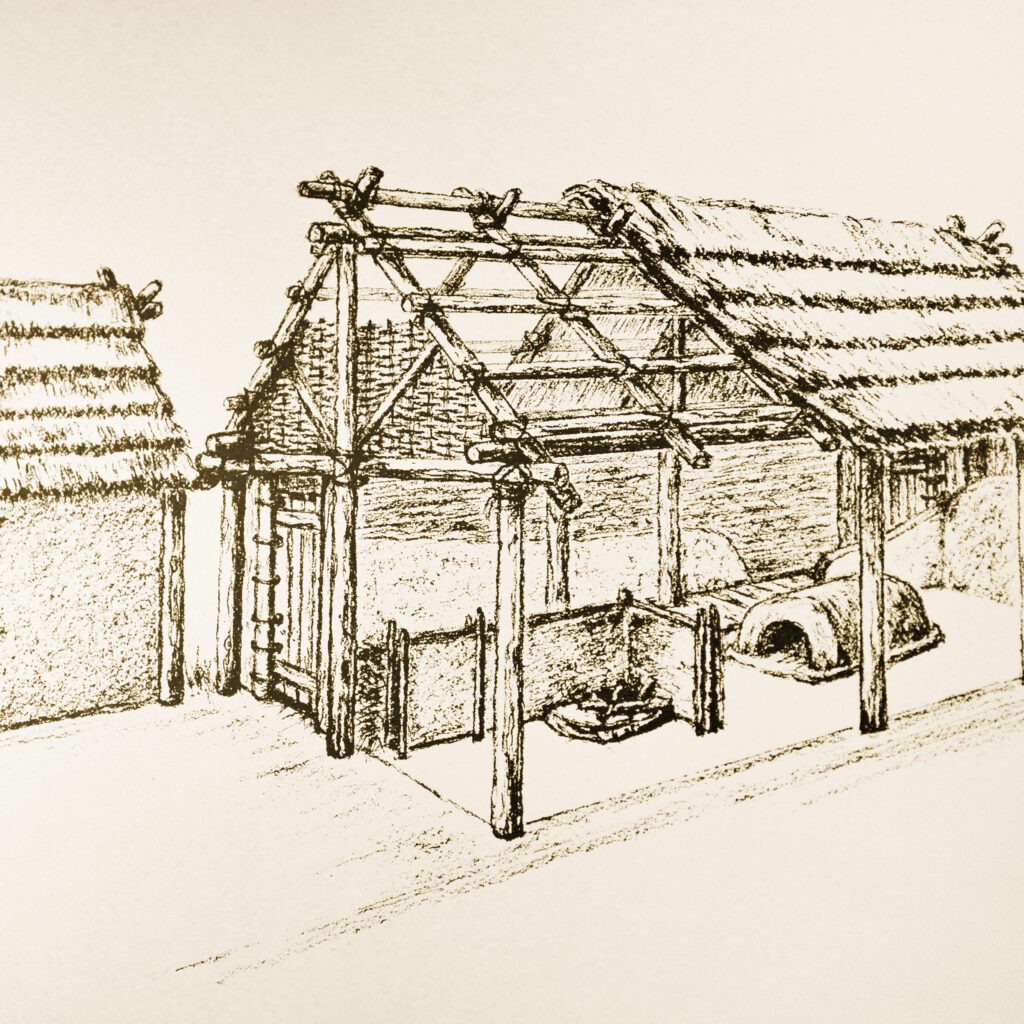 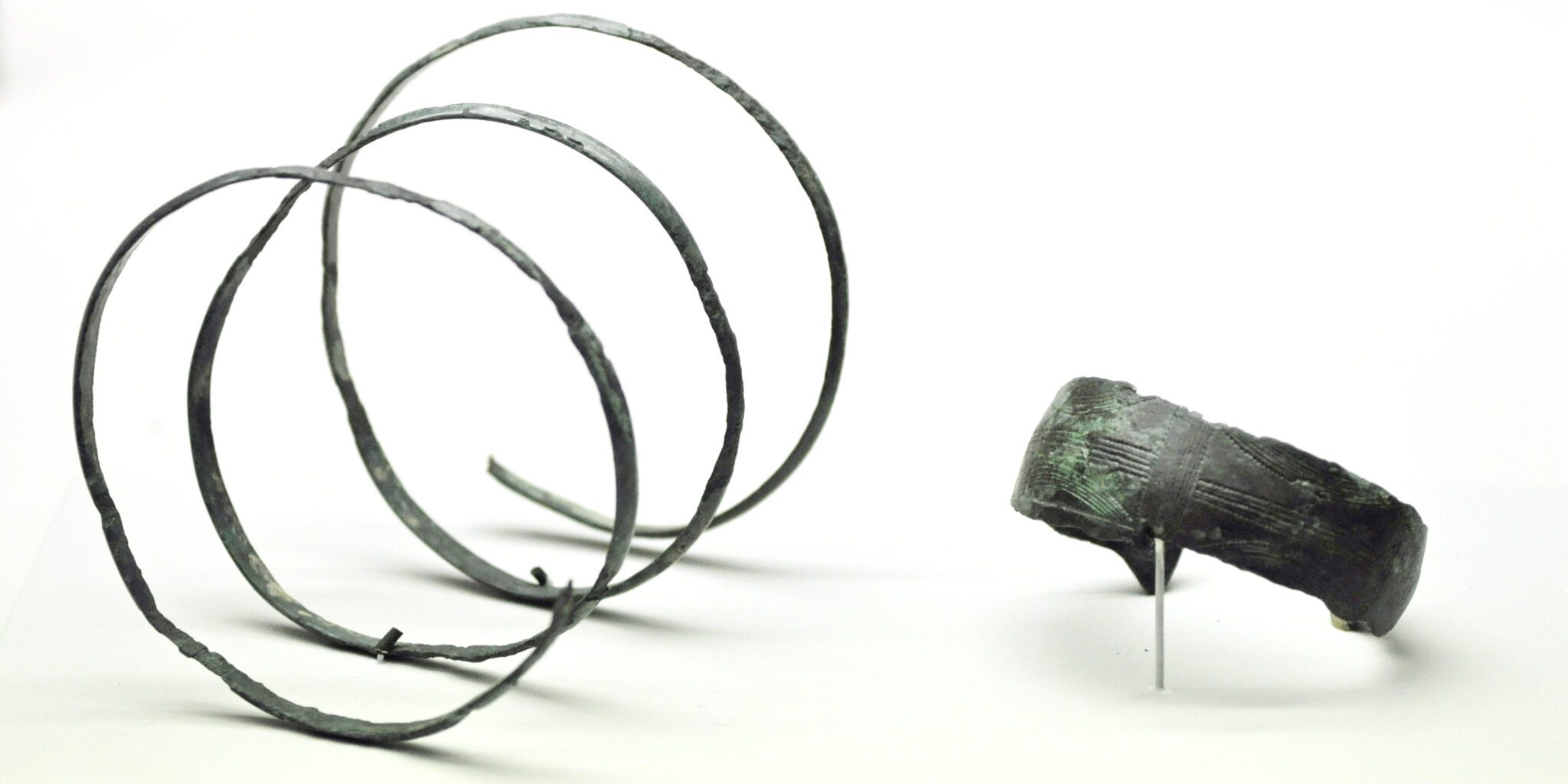 Three bronze swords from the Lower Allgäu region (13-19 BC)

Swords from the late Bronze Age, the “Urnfield Period”, are often found in burial mounds as funerary offerings for men. The weapons were cast in bronze, sometimes in several steps. They were not only used in combat, but were also a status symbol of the warlike elite. Shown here are a hilted sword from Mindelheim (left), which once had a handgrip made of organic material which was not preserved, as well as two solid-hilt swords from Memmingen and Bad Wörishofen. 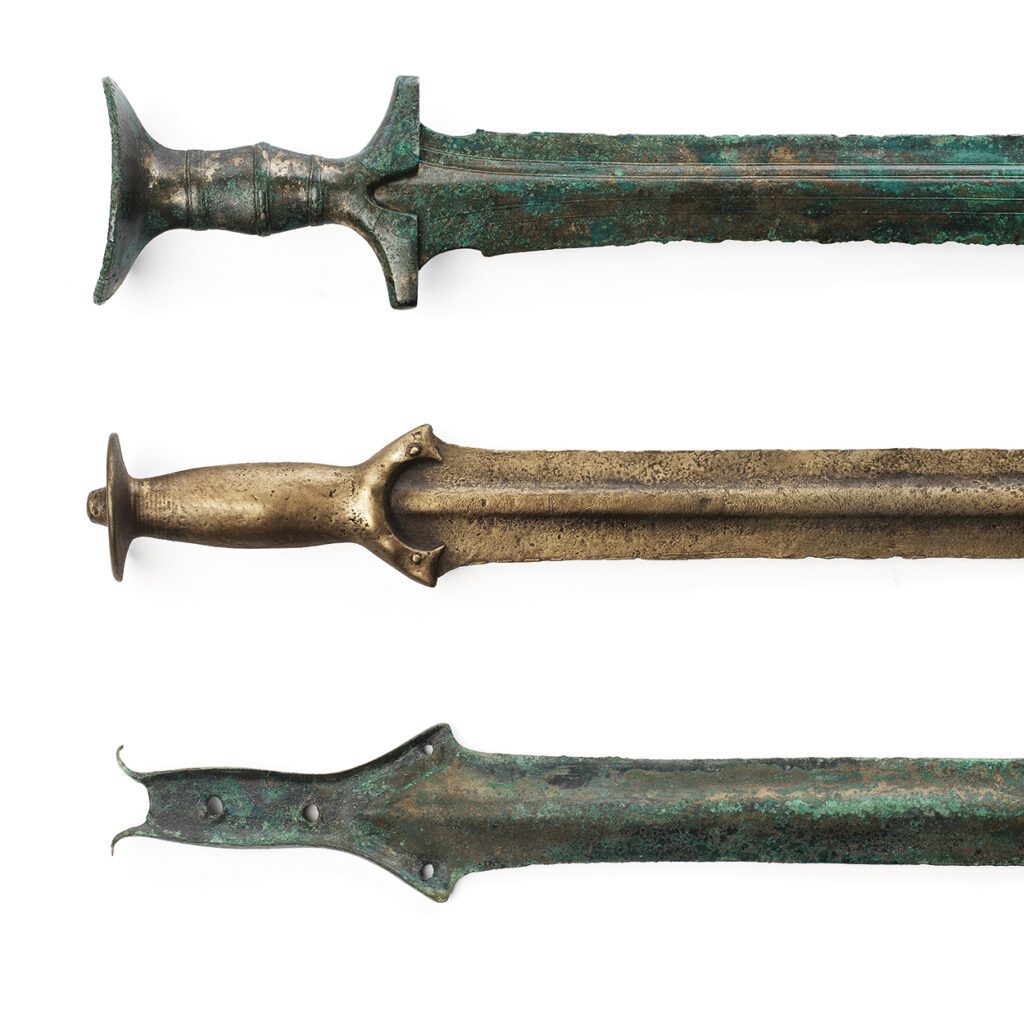 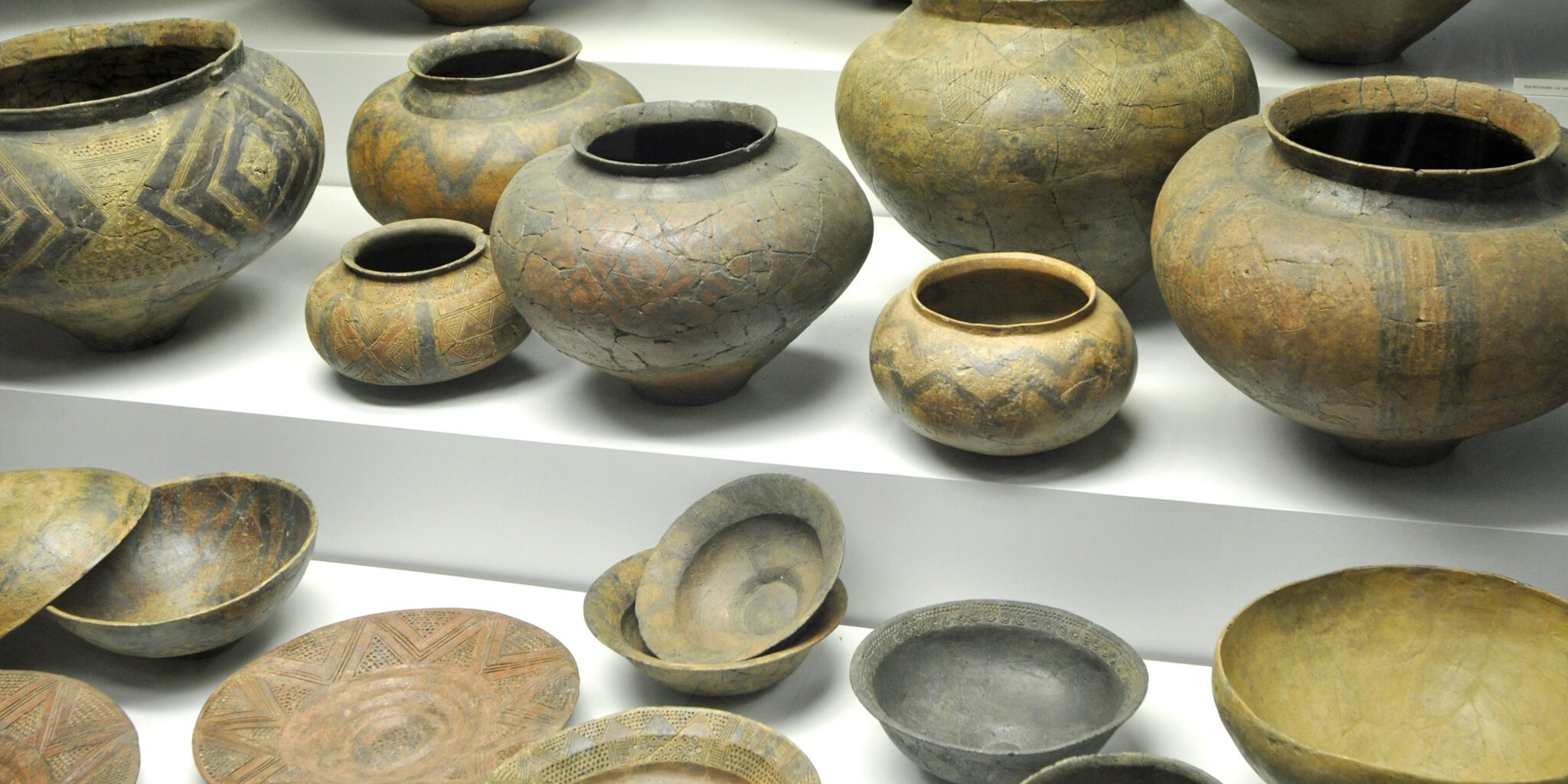 The burial mound field in Mindelheim (8-6 BC)

Richly furnished graves of the Late Bronze Age bear witness to the high standing of the deceased in the society of the day. Large wooden chambers were erected for the dead, above which burial mounds were raised. As burial offerings, the dead were often given parts of the bridle, the harness or a cart that had once been pulled by two horses. Many ceramic vessels were placed in the graves of both men and women to serve food and drink to selected guests in life and in the hereafter. Especially in south-west Germany, these vessels were richly decorated in various techniques with incised linear ornaments, stamps and notched ornaments sometimes inlaid with a white lime paste. 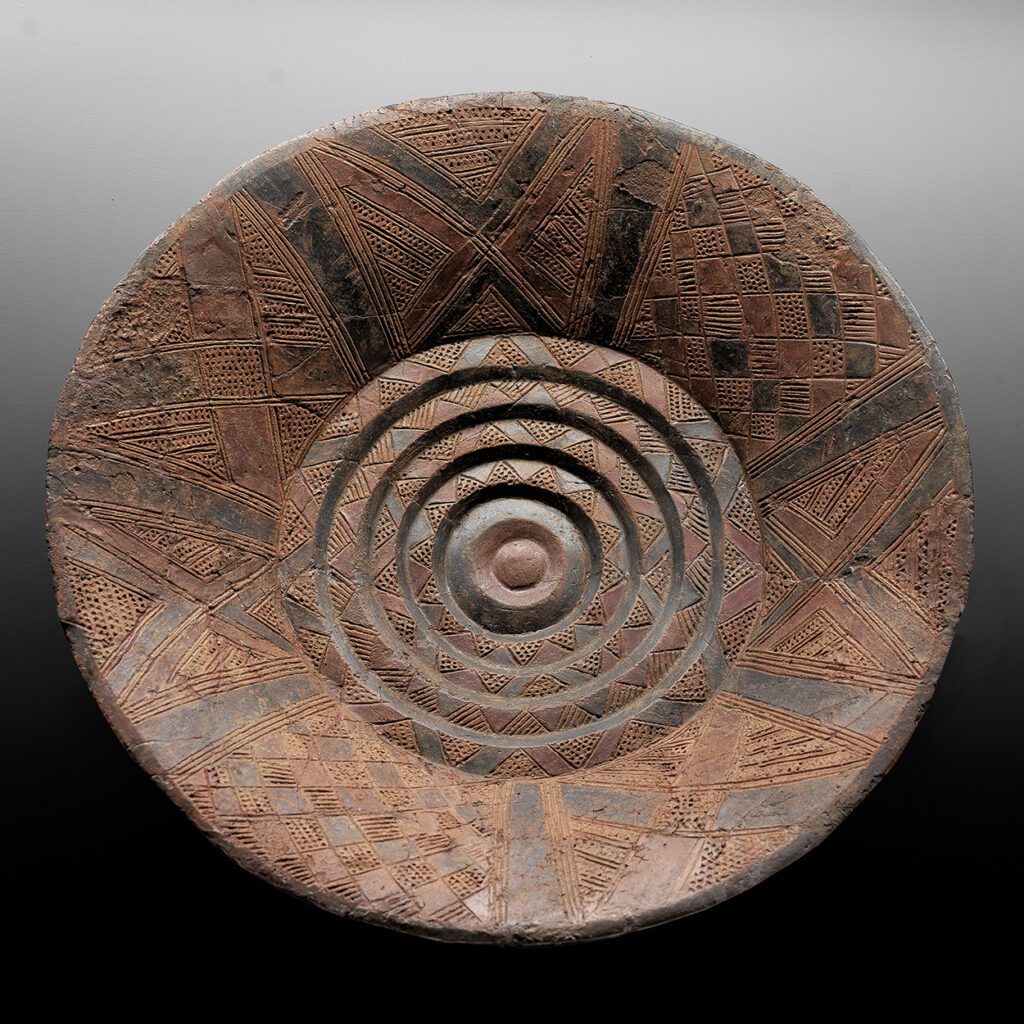 The coin treasure found in Sontheim (mid-2 BC)

The basis for the enormous growth in Celtic local and long-distance trade was the introduction of their own coinage. Initially, the coins of Philip II and his son Alexander the Great (356-323 BC) were imitated, but in the course of the 2nd and 1st centuries BC, the Celts developed their own ornaments and designs. The coin treasure discovered in 1990 near Sontheim in the Lower Allgäu region contained more than 350 Regenbogenschüsselchen (“small rainbow bowls”), as these typical, slightly concave gold coins are called. Many coins were made from the same pair of dies, which indicates that they were deposited soon after their production. 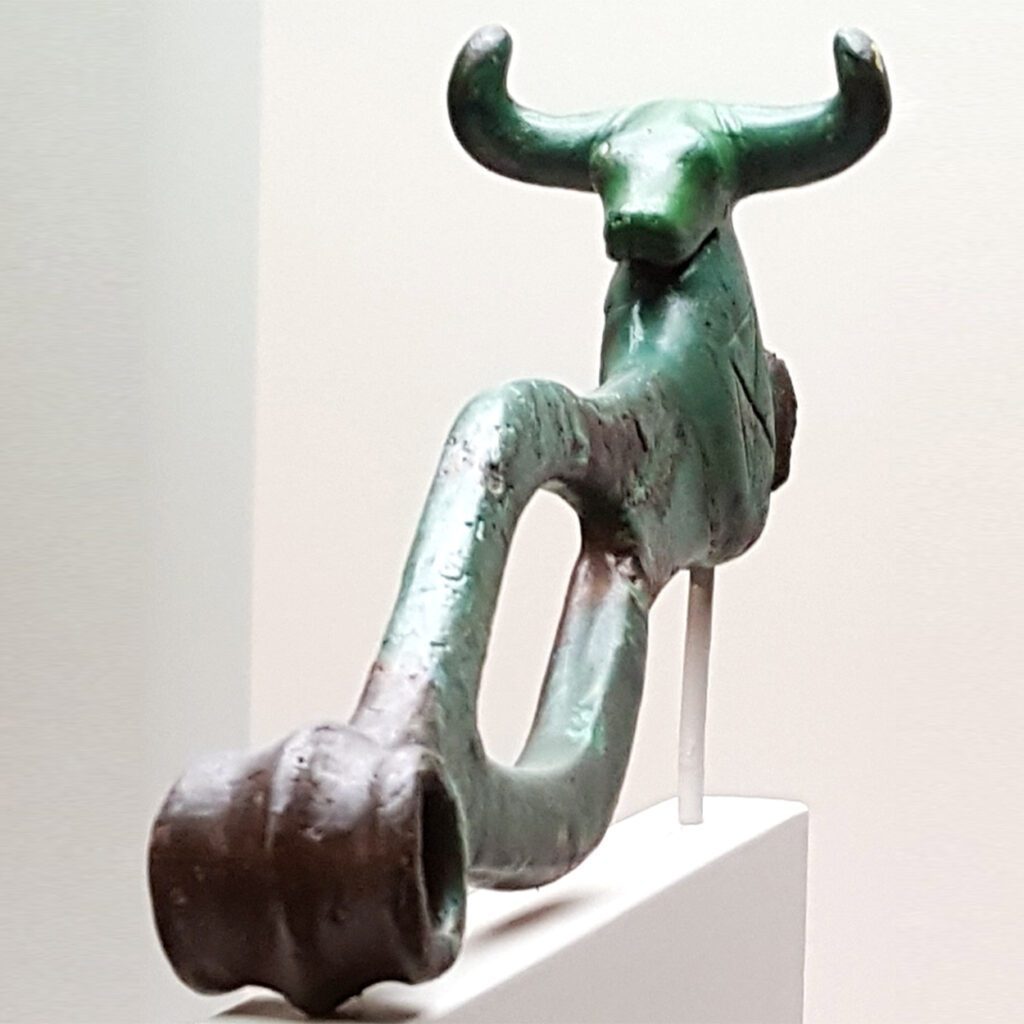 < Anno 1653, December 3, we inherited the “small rainbow bowls” from our Sister Ludavica Muetter, may God rest her soul >

Fortifications on Auerberg Mountain (around 12-40 AD)

In the course of their conquest of the Alpine foreland, the Romans established a settlement fortified with ramparts and trenches on Auerberg Mountain, between Füssen and Schongau. The site was of particular economic and administrative importance due to its proximity to the Via Claudia Augusta, the main route across the Alps to Italy. Around the middle of the 1st century AD, the urban settlement ceased its function and was abandoned or moved to an unknown location. Numerous finds give evidence of the production and processing of iron, bronze, glass, ceramics and textiles. The production of arrows for the army is unusual. Several weapons, especially daggers in sheaths richly decorated with silver, prove that legionaries were present here, at least temporarily. 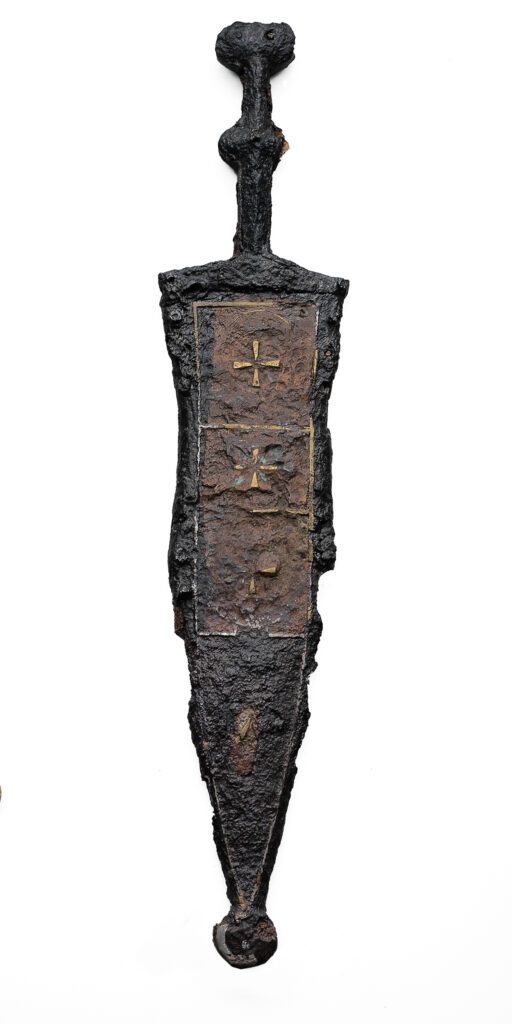 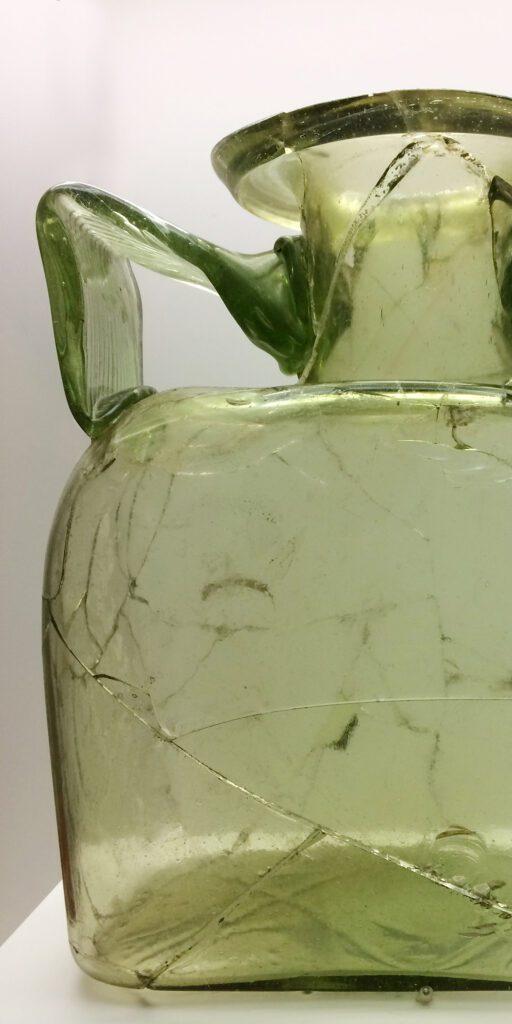 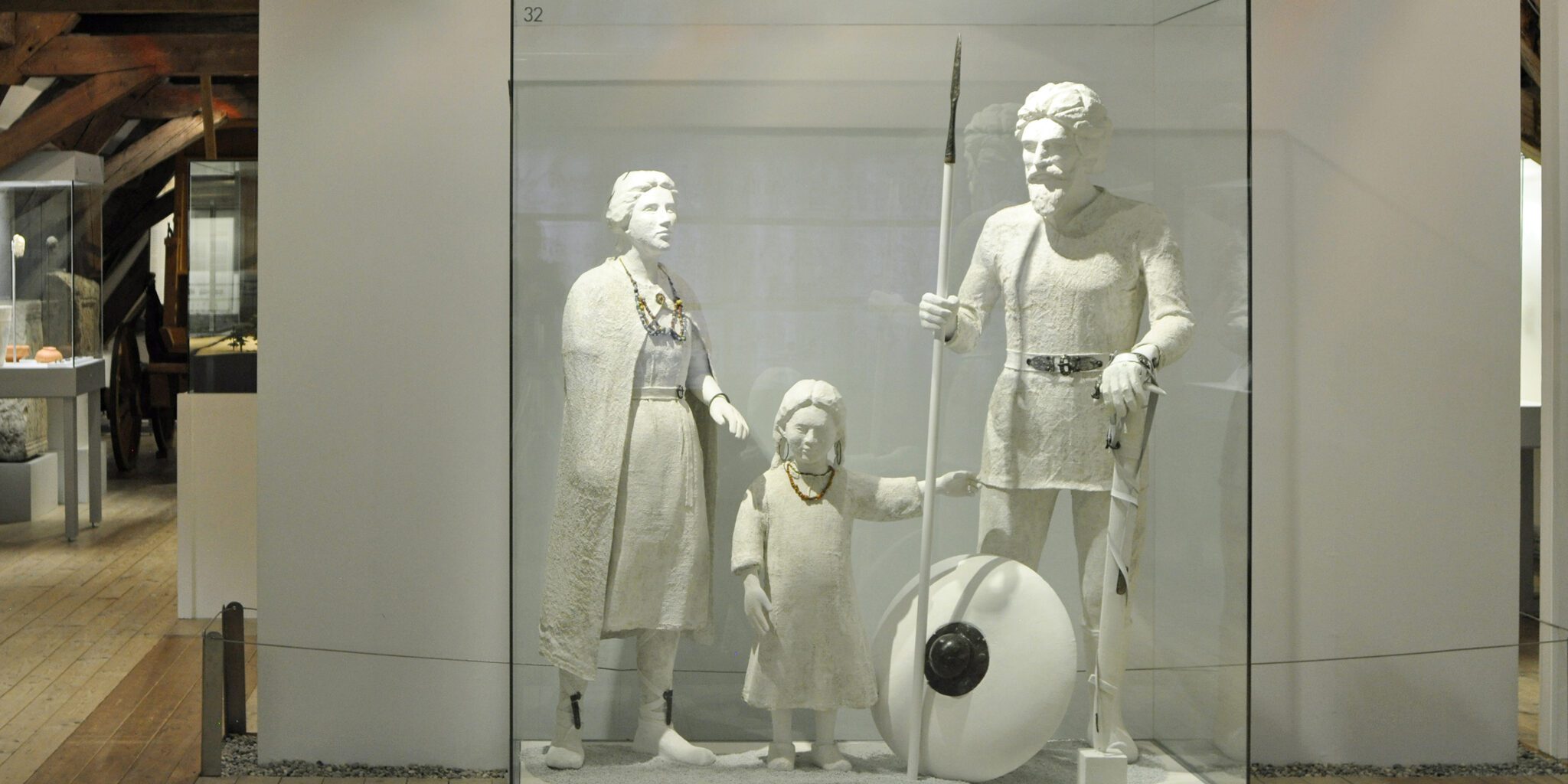 The Alemannic graveyard in Mindelheim (6/7 AD)

In the early Middle Ages, the dead were buried together with a rich array of funerary offerings. Women’s graves usually contain jewellery; men’s graves contain weapons and magnificently decorated belts with trimmings. Clay vessels stamped with decorative motifs preserved food for the afterlife. The Mindelheim graveyard encompasses 160 burial sites. A few objects have a Christian meaning, for example, a gold leaf cross. Some luxury items were imported from the Rhineland and northern Italy. A disc-shaped fibula with stone inlays and filigree decoration elements is of outstanding quality. It was once the clasp on a cape belonging to a high-ranking woman. 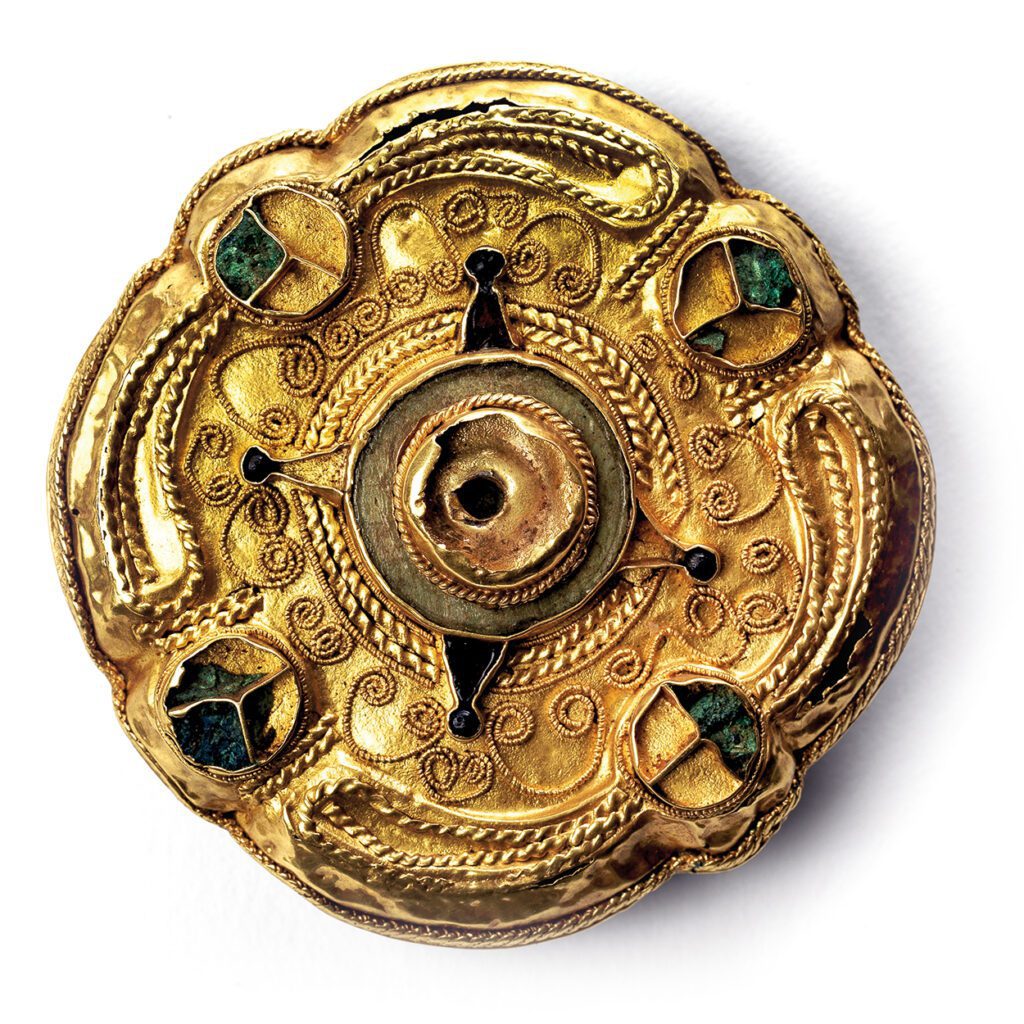