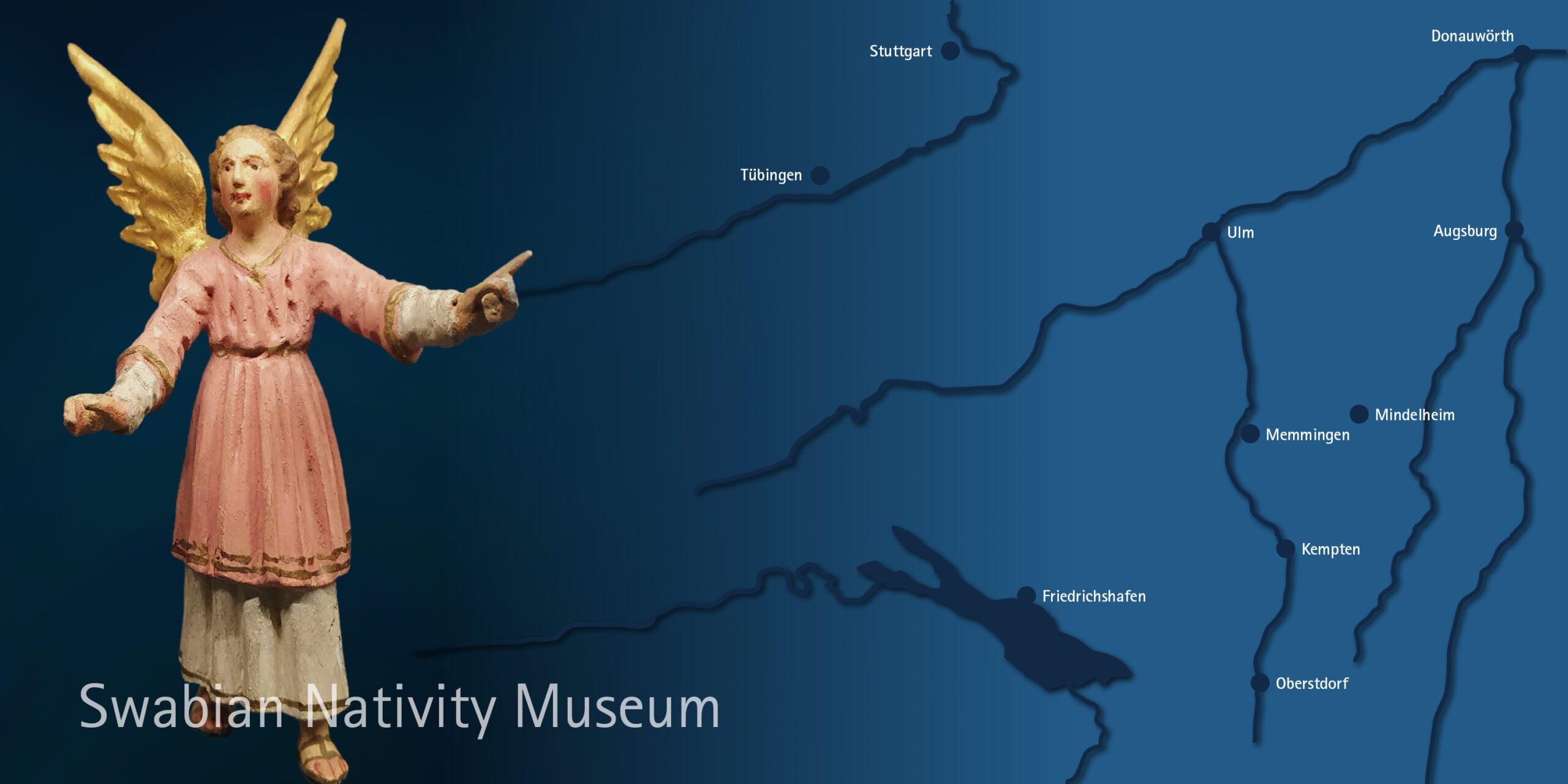 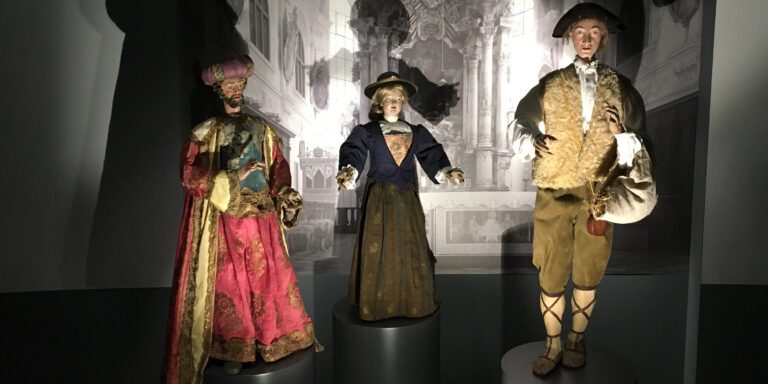 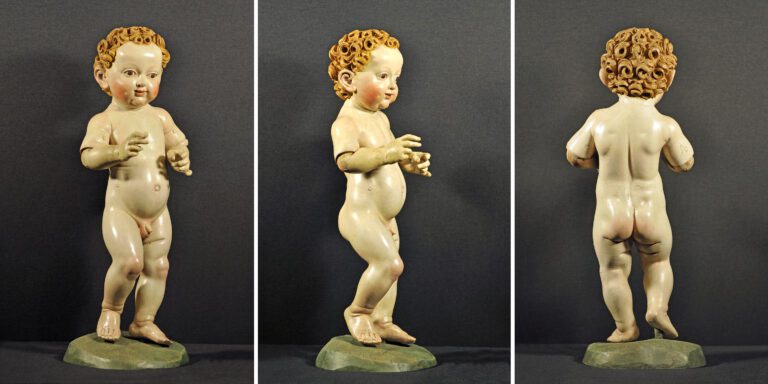 PRECURSORS OF THE NATIVITY CRIB 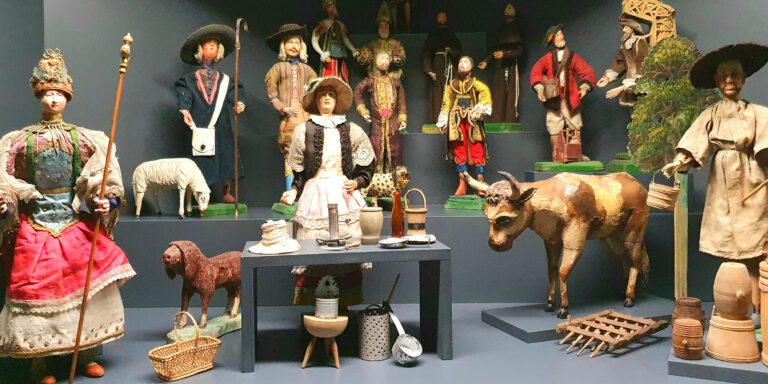 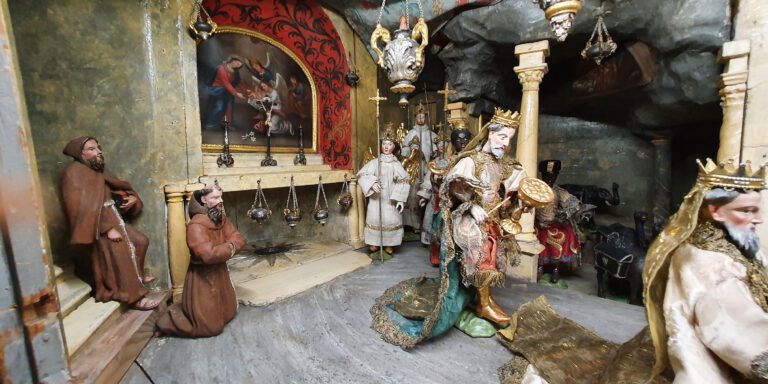 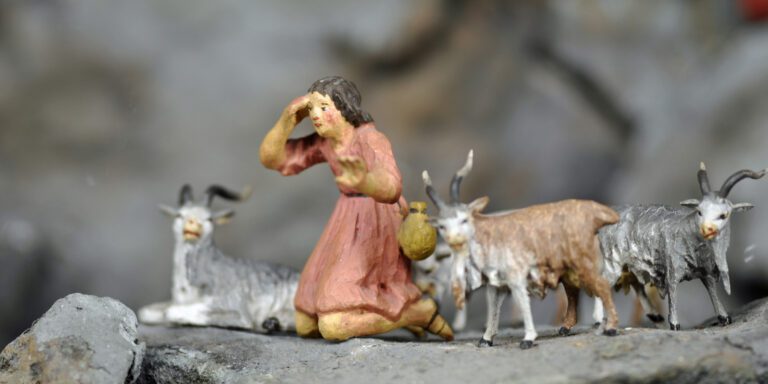 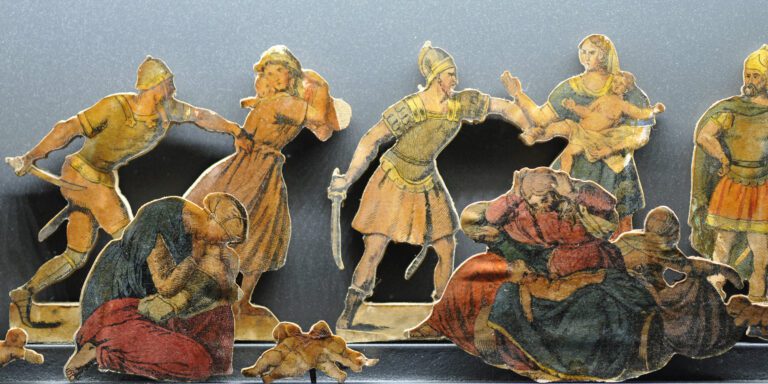 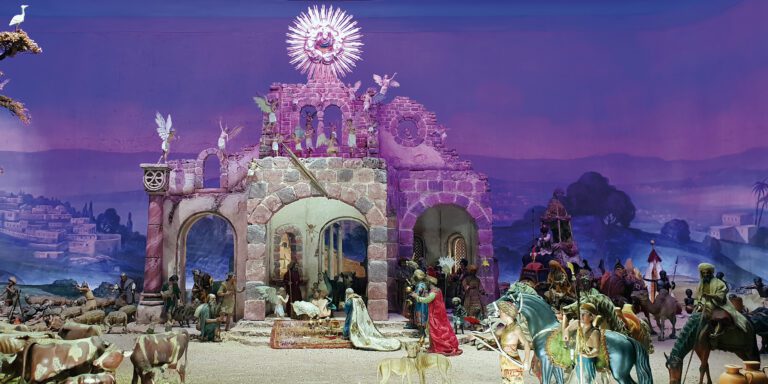 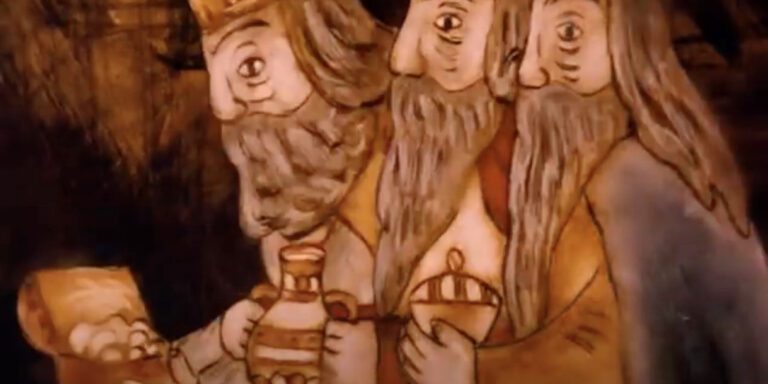 The re-designed Swabian Nativity Museum has a comprehensive, first-class collection of Nativity scenes from the Swabian region dating from five centuries. In 2019, it was awarded the Swabian Museum Prize dedicated by the Hans Frey-Kulturstiftung. The exhibits range from the oldest Nativity crib ever made in Swabia – one of the first to be made north of the Alps – to contemporary nativity scenes. However, the Swabian Nativity Museum offers far more than just a chronological sequence of idyllic worlds in miniature. Instead, we have developed individual thematic islands around the subject of the “Nativity crib”. Different production techniques and materials are presented in this permanent exhibition, with a focus on the people who created the objects. The main emphasis in the Swabian Nativity Museum is on the cultural history behind the exhibits, which is why the museum is open all year round.
Play Video

In the mid-16th century, the Jesuit Order “invented” the Nativity crib as a medium for preaching in the Christian church. The Jesuits recognised that images were far more compelling than the spoken words of a sermon. Free-standing, lifelike figures that seemed to interact with one another were a new and very effective means of communication during the Counter-Reformation. The scenes were enriched with effects which touched all the senses and captivated the viewers: music, reflections of light, plays performed by Jesuit scholars in front of the Nativity crib, or the aroma of real food. The crib of the Jesuit Church in Mindelheim, first presented in 1618, is the oldest in Swabia. 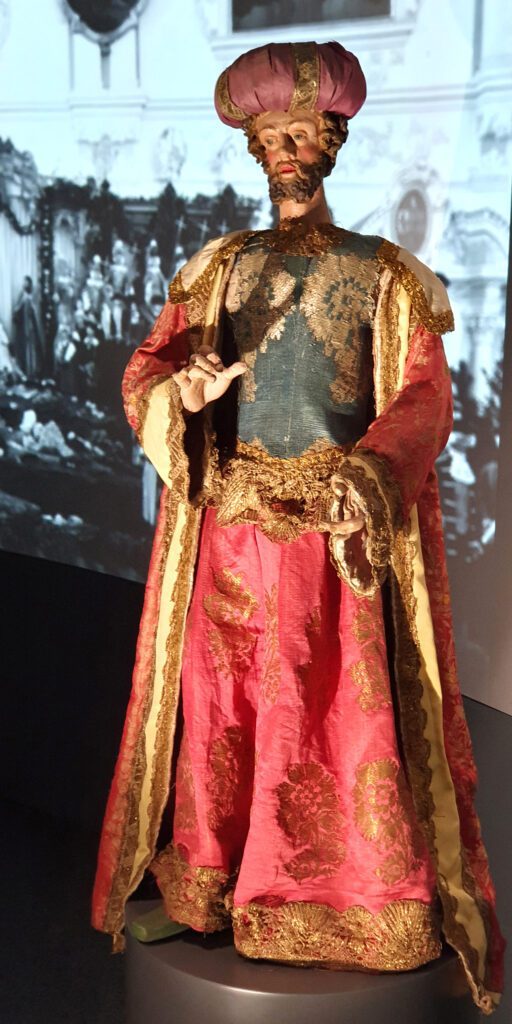 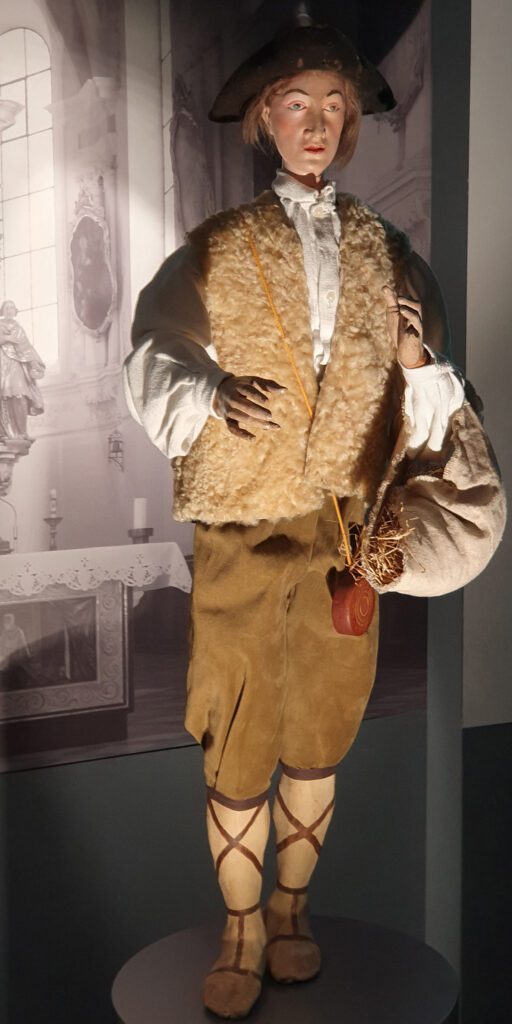 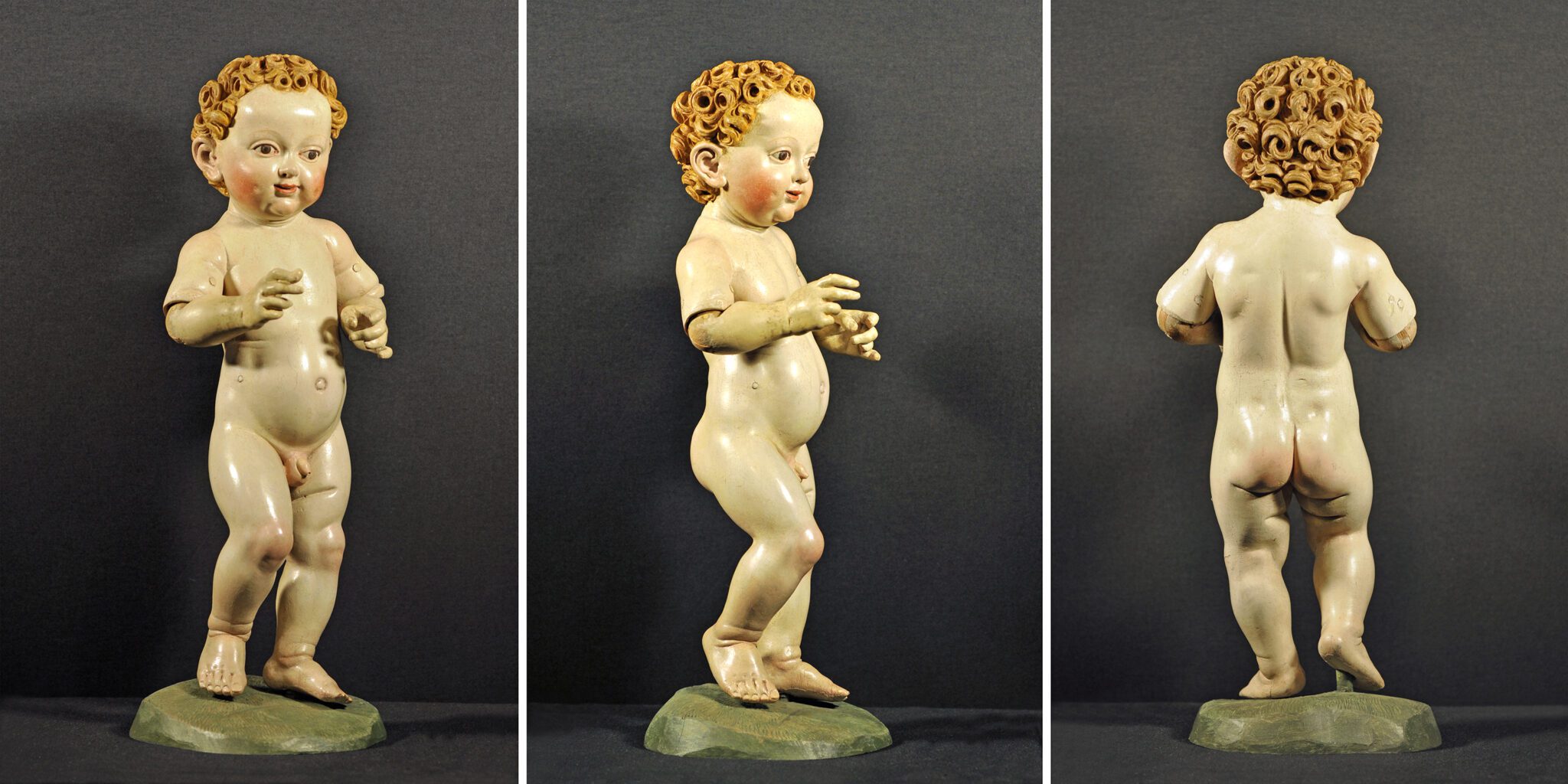 PRECURSORS OF THE NATIVITY CRIB:
Figures of the Christ child

Individual figures of the Christ child were the direct precursors of the Nativity crib. They are an “invention” which emerged in Swabian women’s convents in the early 14th century. By 1500, it had finally become common practice for every novice to bring one of these figures with her upon entry to the convent. One outstanding example was created by the Swabian sculptor Michel Erhart in about 1495. The woodcarvers of this time not only emphasised the realistic aspects of the figures, but also their interaction with other participants in the Christmas story. This paved the way for the first Nativity scenes, which emerged in the second half of the 16th century. The absolute highlight of the collection is the world’s oldest figure of the Christ child, dating from the year 1300. 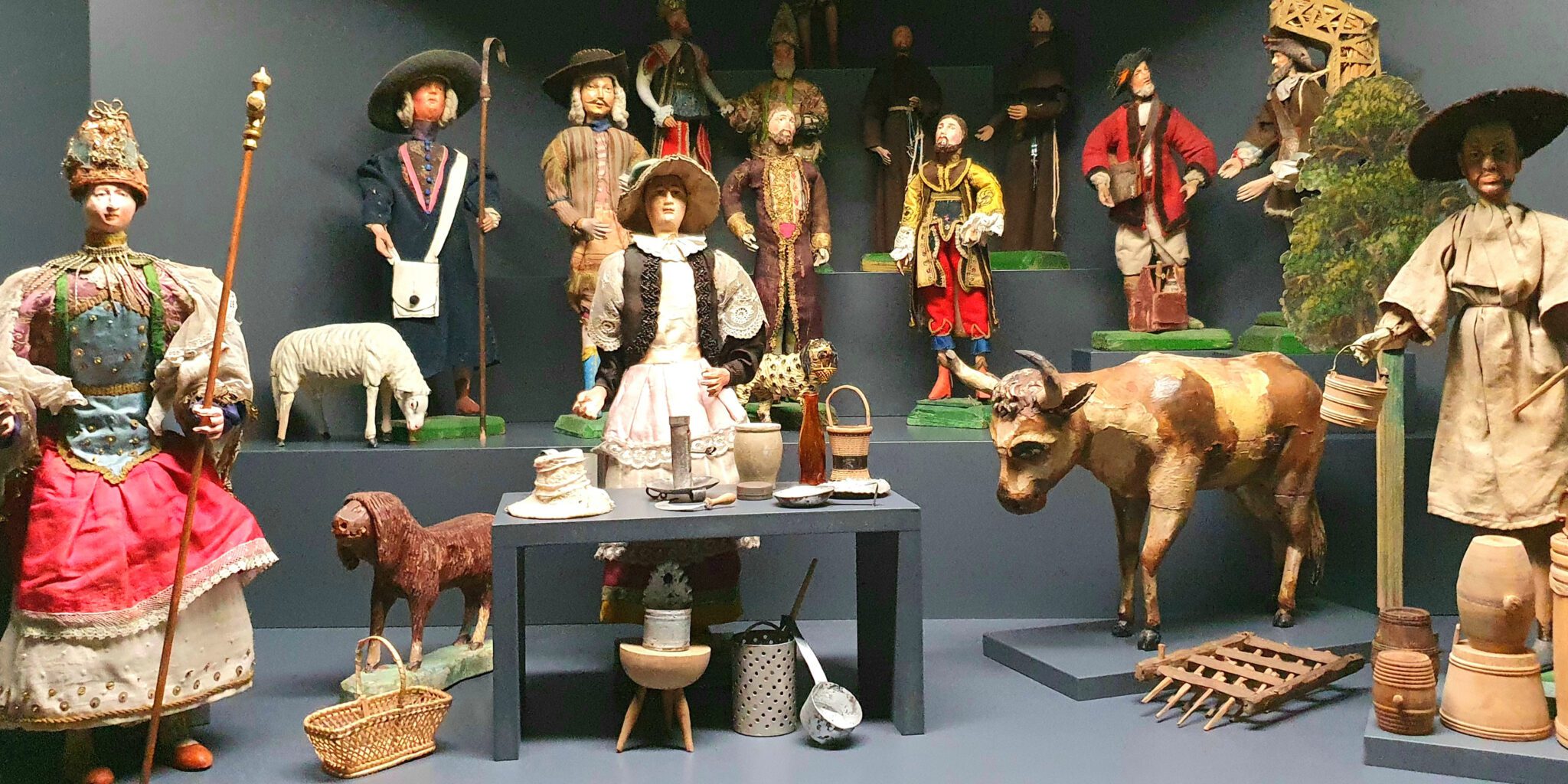 The grandiose, theatrical church cribs of the Baroque period were the expression of a sensual culture of piety. Light-hearted scenes reflect sensual pleasure, and the Christmas story is almost lost amongst the bustle of everyday life. During the Enlightenment, this medium, introduced during the Counter-Reformation, was not well received. Even in clerical circles, there was scepticism about a figurative presentation of the story of salvation. The customs surrounding the Nativity scenes were regarded as popular excesses that did not do justice to religious dignity. Numerous church cribs were put into storage, destroyed or sold. Many others ended up in village churches or private households, thus establishing a tradition of the Nativity scene amongst the middle classes.

CONTEMPORARY DOCUMENTS
Nativity cribs as a mirror of their time

At a media station, visitors to the museum can find out what is behind the phenomenon of the “Star of Bethlehem”, seen from a modern scientific and astronomical perspective. Generations of crib makers have attempted to portray their version of the events surrounding the year “zero” as accurately as possible. In doing so, however, they revealed far more about the reality of their own lives than about the historical reality of the events surrounding the birth of Christ. One example of this is the Nativity scene which originally belonged to the Franciscan nuns in Mindelheim. In the 18th century, they presented their figures in a detailed replica of the Church of the Nativity in Bethlehem, as it was seen in their day by the pilgrims to the Holy Land 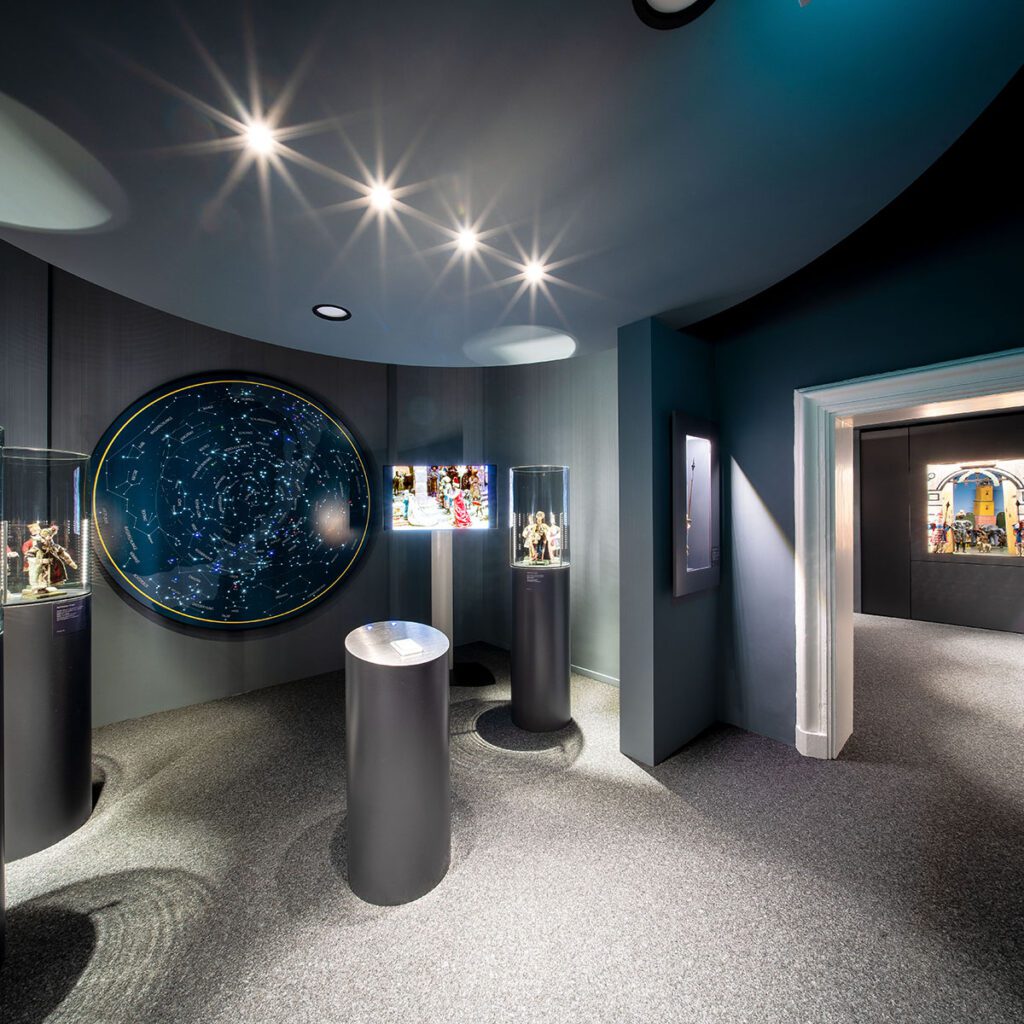 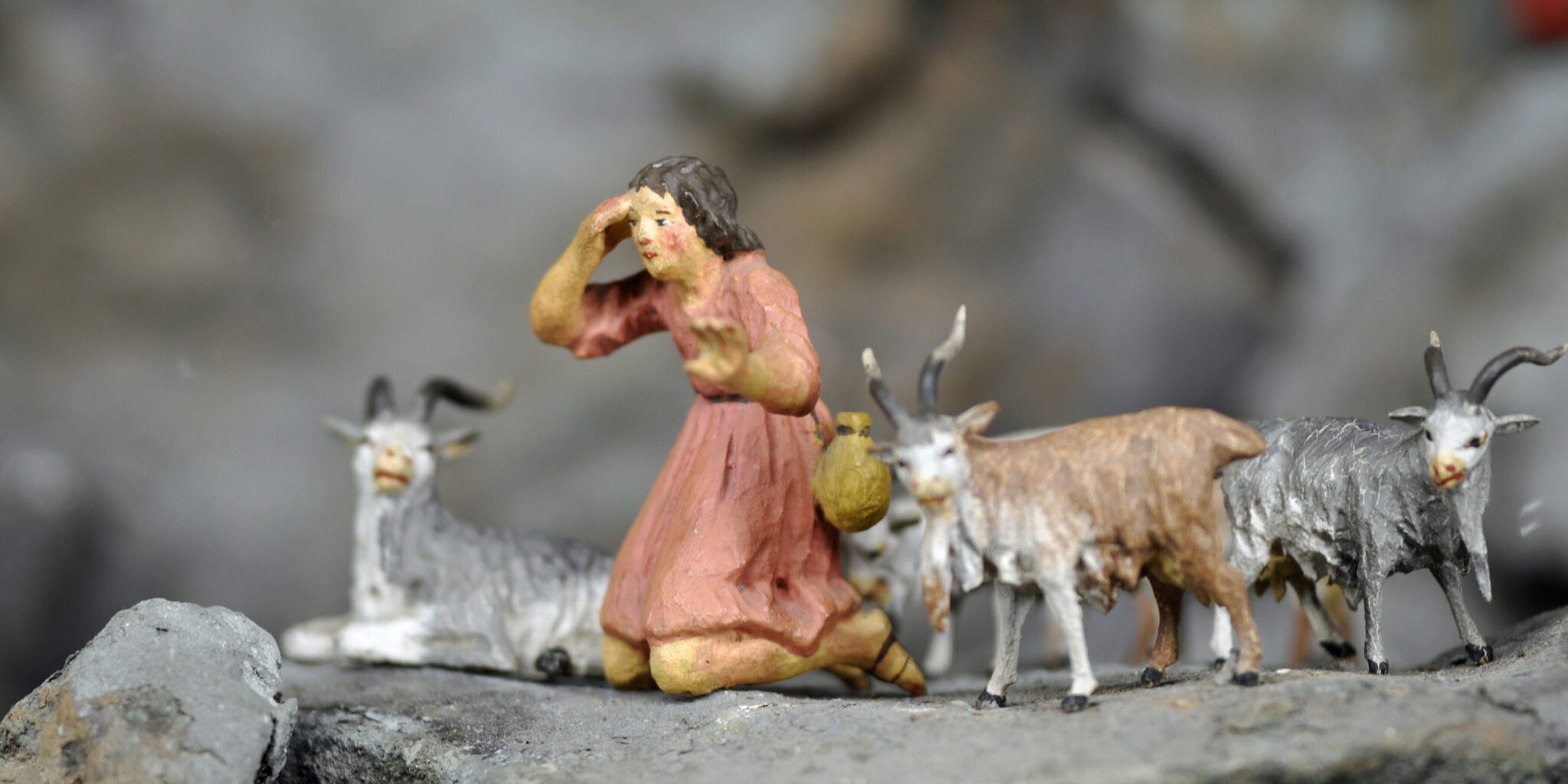 The area around Krumbach is known as the “Swabian Nativity Paradise”. We have evidence that there were several talented amateur woodcarvers in every village – be it ever so small – from at least the 19th century onwards. Artistic carved figures by Josef Wiegel from Burgau defined the style of the Nativity crib around 1900. Countless amateurs tried to emulate him. The life story of Josef Wiegel, a journeyman bricklayer, for whom woodcarving was not only a hobby but a contribution to the livelihood of his large family, is told in the Swabian Nativity Museum. In contrast, we present the story of a baker’s family from Mindelheim, whose large and magnificent Nativity crib dating from the same period was only a hobby and a real expression of their passionate enthusiasm for the Nativity scene. 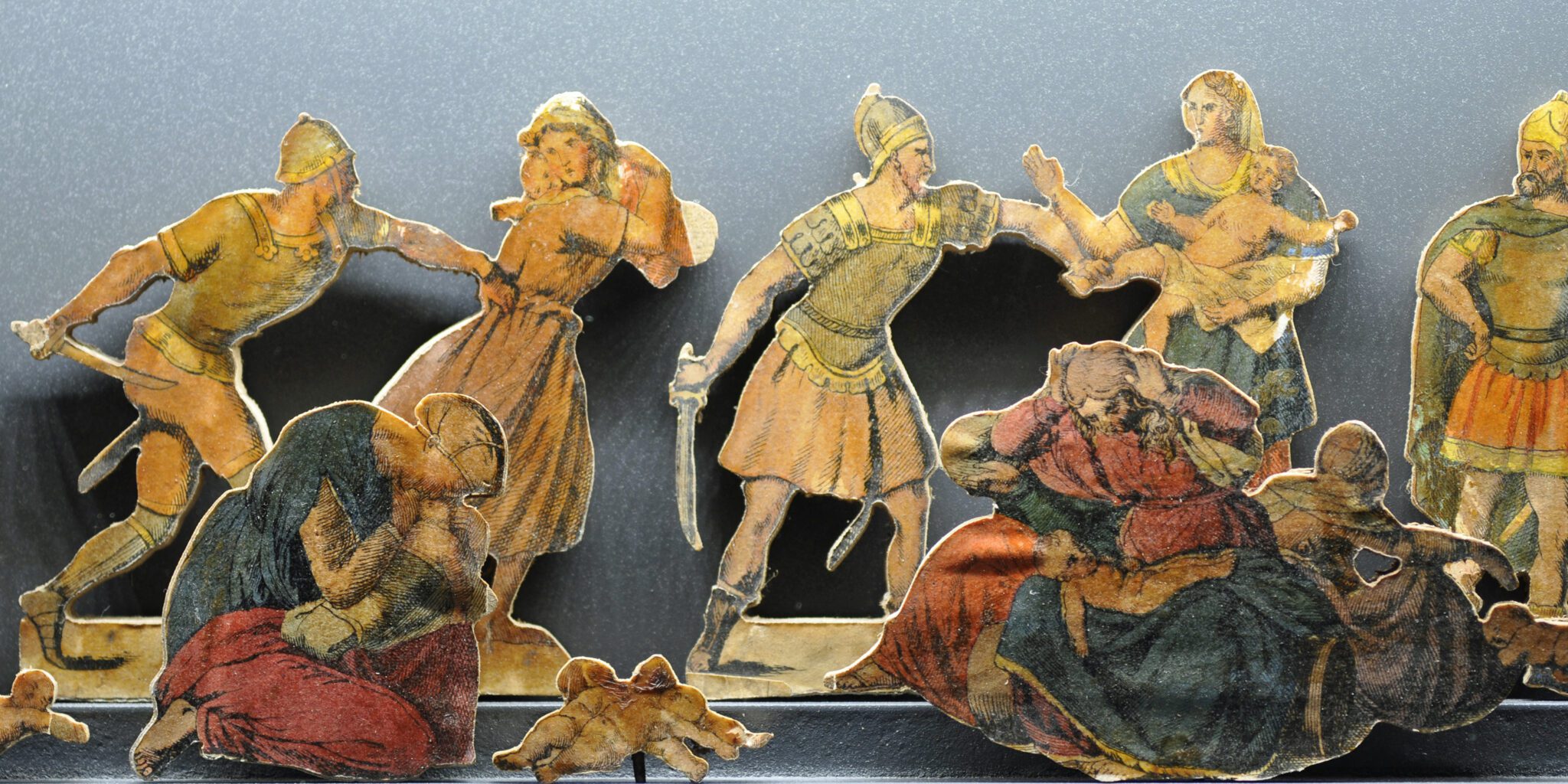 QUANTITY, NOT QUALITY?
The serial production of Nativity figures

Around 1850, the enthusiasm for Nativity scenes also reached the poorer classes and called for new, faster and, above all, cheaper production methods. At first, the typical Swabian “Bachene“ – figures “baked” from clay in a mould – were highly popular. However, by the end of the century, cast or pressed figures made of wax, papier-mâché, plaster or “Masse” (a mixture of paper, glue, chalk, plaster and wood shavings) had advanced to become absolute best sellers. During the 1960s, the same moulds were finally used for the manufacture of plastic figures. Paper cut-out cribs were printed in Augsburg from about 1700 onwards, and, at that time, this Swabian town was the market leader in Europe. The tradition was continued in the 20th century by the publishing house of Schreiber in Esslingen. 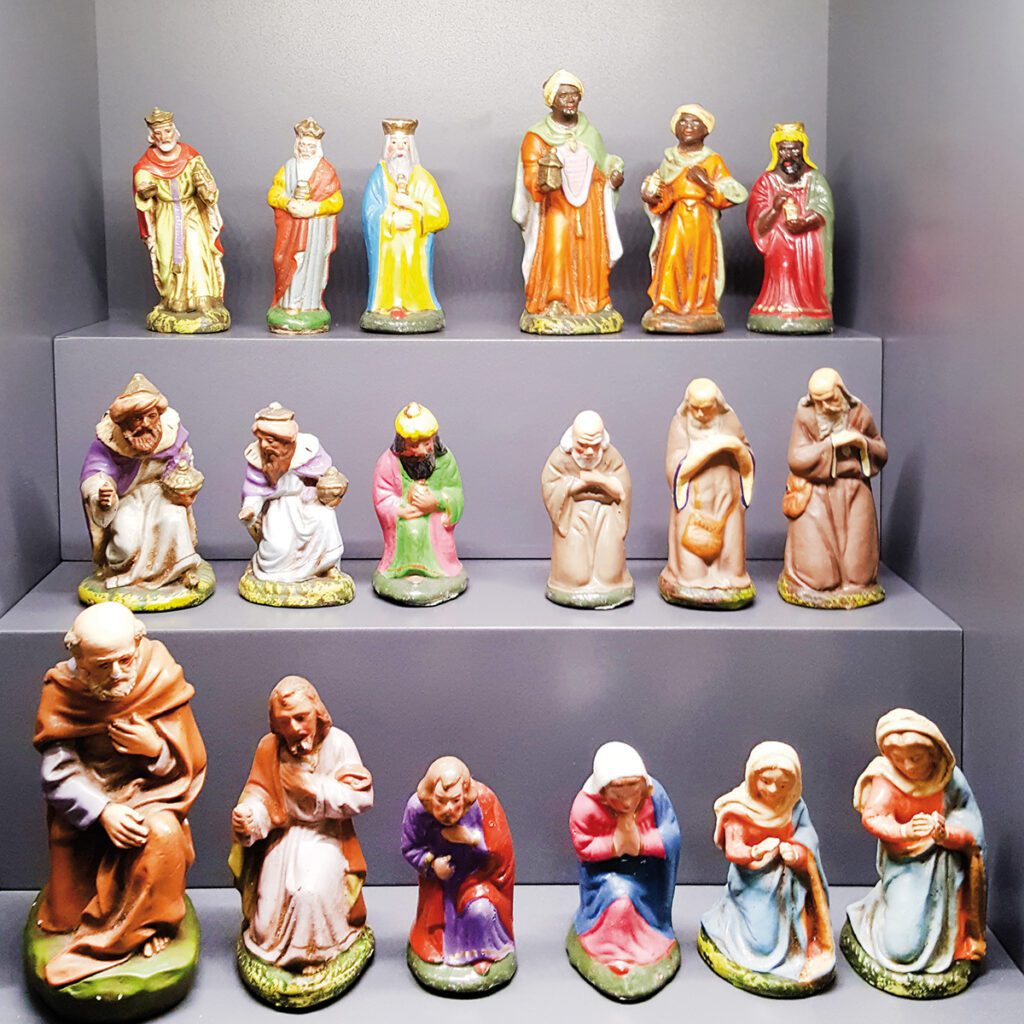 Swabian Nativity scenes transported the birthplace of Jesus into a Swabian landscape. The figures were dressed accordingly, in typical Swabian costumes. The high priests were presented in contemporary vestments of the day. As a contrast, the oriental Nativity crib emerged in Munich around the year 1800 with the aim of creating an exact replica of the Holy Land and its people. During the 1920s at the latest, this style developed to become the epitome of the artistic Nativity scene. For an authentic representation, some artists even undertook an educational journey to the Holy Land. In Swabia, the “Bavarian-Oriental” figures became a “must have” and replaced or supplemented many old Nativity cribs from the region. 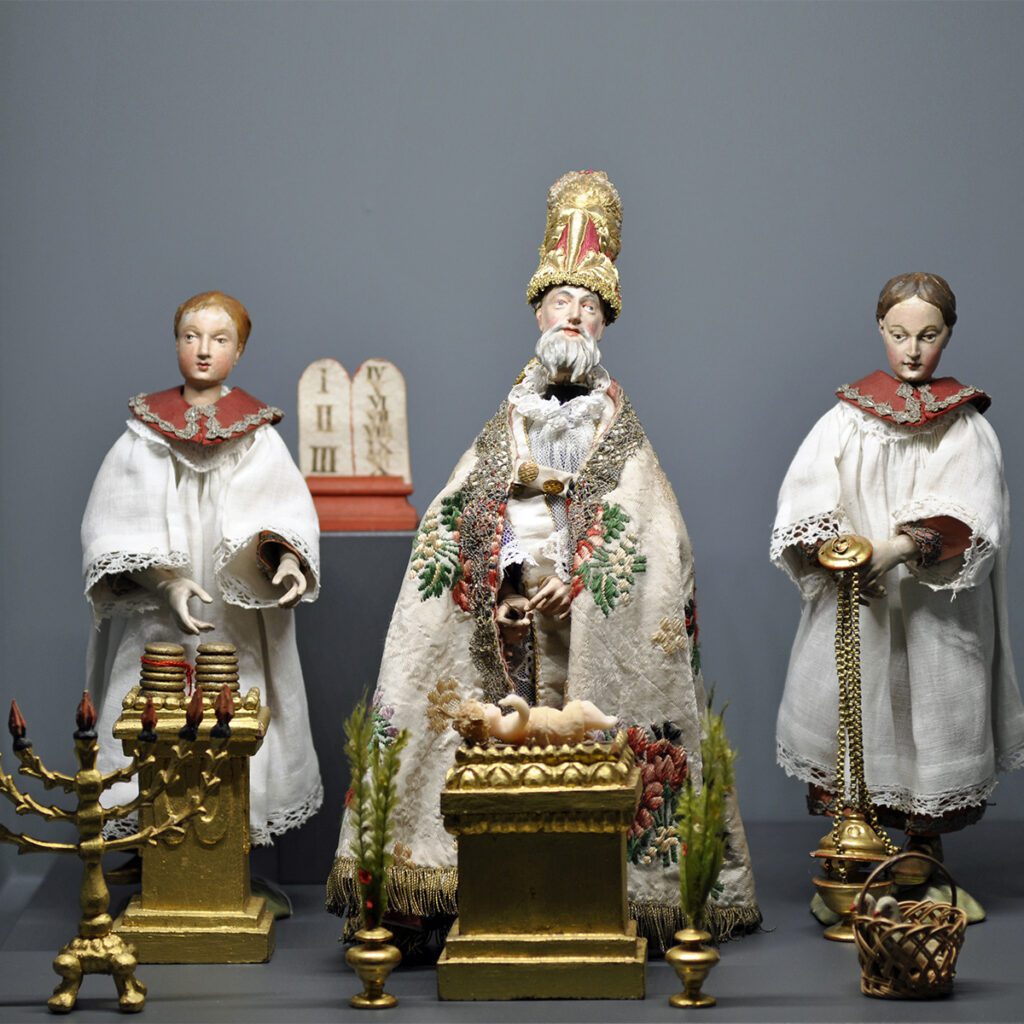 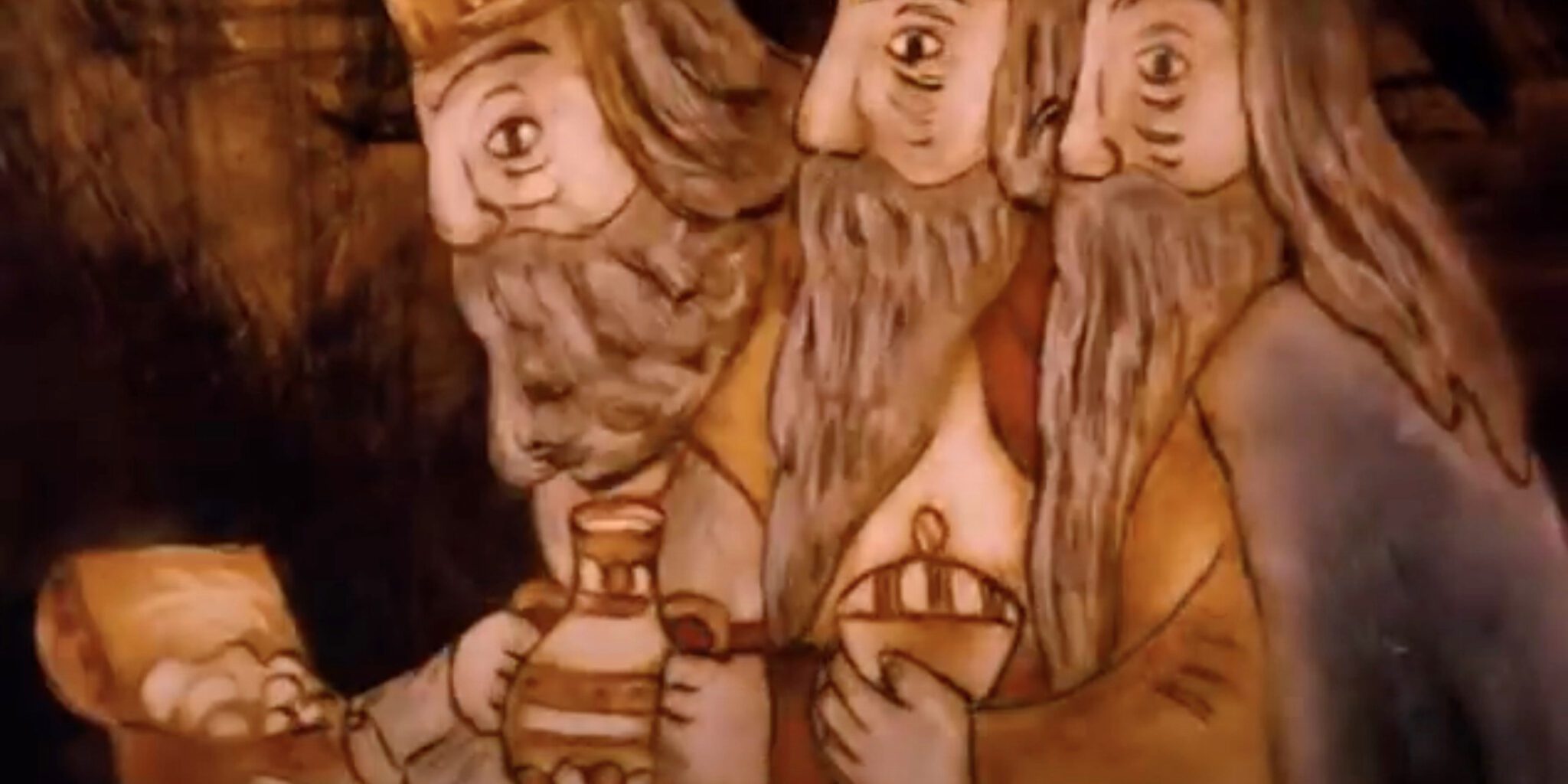 Until the 1960s, the style of an artistic Nativity scene was an oriental world in miniature. However, in the last few decades, there has been an opposite trend – away from ambitious handicrafts towards contemporary forms of expression such as sculpture or new media. Sculptures, videos and comic strips transpose the Christmas story into modern times, or let it transcend all space and time through abstraction. The intention is to express the universal validity of the theme, often by linking it to current social issues. In our iconic world, the pictorial representation of the Christmas story is used as a medium of visual communication. 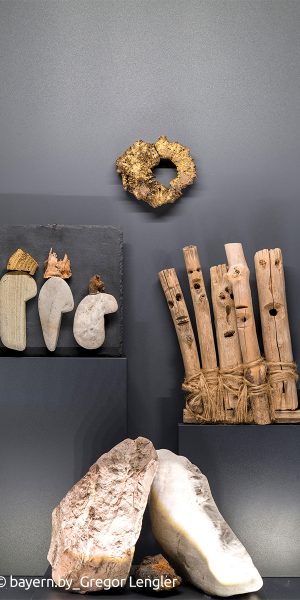